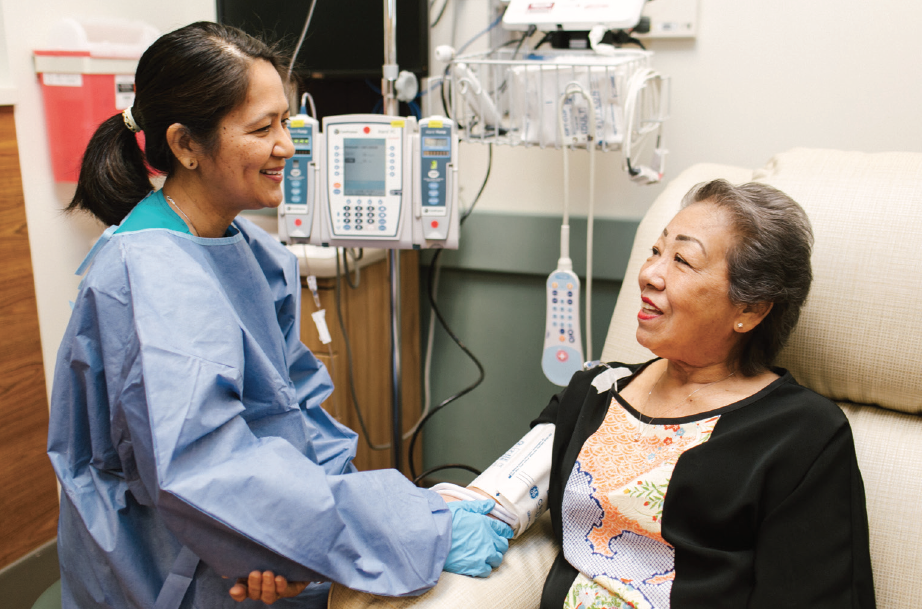 I wouldn’t be as passionate about Pali Momi if I hadn’t received the care I did.
ADELE TAKAMOTO

Adele Takamoto makes friends easily. The 67-year-old Aiea woman is always ready to greet you with a smile and a joke. In her retirement, Adele has developed many passions, including trying new restaurants and volunteering at her church. Her newest passion project is fundraising for the Hawaii Pacific Health Cancer Center at Pali Momi Medical Center. Her mission is not only philanthropic; for Adele, it is personal.

While visiting San Jose, California, during the holidays in 2017, Adele suddenly suffered pains throughout her body and got dizzy. She went to the emergency room and stayed there for five days. Doctors were not able to confirm a diagnosis, but her symptoms abated so they released Adele on Christmas Eve and she returned home to Hawaii. Shortly after the new year, Adele’s daughter, Justine, found her unconscious on the floor in the middle of the night. Justine immediately called 911 and her mother was taken to Pali Momi.

Initially, emergency staff thought Adele had an unusual strain of flu, but tests revealed something else much more serious—a tumor on her liver. It was lymphoma. “When the doctors told me I had stage four cancer, I thought, ‘Ok, so what are we going to do about it?” Adele said. “I’m used to putting on a brave face for my sisters and my daughters. I’ve always felt that feeling sorry for yourself is not productive. So when I heard the diagnosis, I reflected upon it and took it as a reason to fight for myself.”

The doctors created an intensive treatment plan that began in March 2018. “Cancer care is a very complex endeavor,” said Dr. Galen Choy, Adele’s oncologist. “This complexity is rapidly increasing. It requires the integration of multiple medical specialists to develop and execute an optimal treatment plan for an individual patient’s cancer. The cancer center at Pali Momi is this type of a resource for our Central and West Oahu neighbors.” Adele received chemotherapy every three weeks at the cancer center, and the nurses, technicians, volunteers and the entire team were with her all along the way. “They became more than staff, they became my friends,” she said. “All of the staff are so special, especially my nurse, Elvira Dejesus. I would look forward to my treatments because I knew I would be seeing her.”

Five months later, Adele was declared cancer free. While she no longer requires treatments, her connection with the cancer center has only grown stronger. Adele is now focused on raising money to ensure the center is able to serve generations to come.

“I want Pali Momi to continue to have advanced techniques and equipment for cancer care. It would give everyone who lives in Leeward and West Oahu the same chance I had to be cured,” Adele shared. “I wouldn’t be as passionate about Pali Momi if I hadn’t received the care I did.”

Adele’s desire to help Pali Momi any way she can does not go unnoticed by the staff. “Adele is a very strong, energetic and determined person who is clearly driven to make a difference,” said Dr. Choy. “This drive, which is put into action to help others, is extremely admirable.”