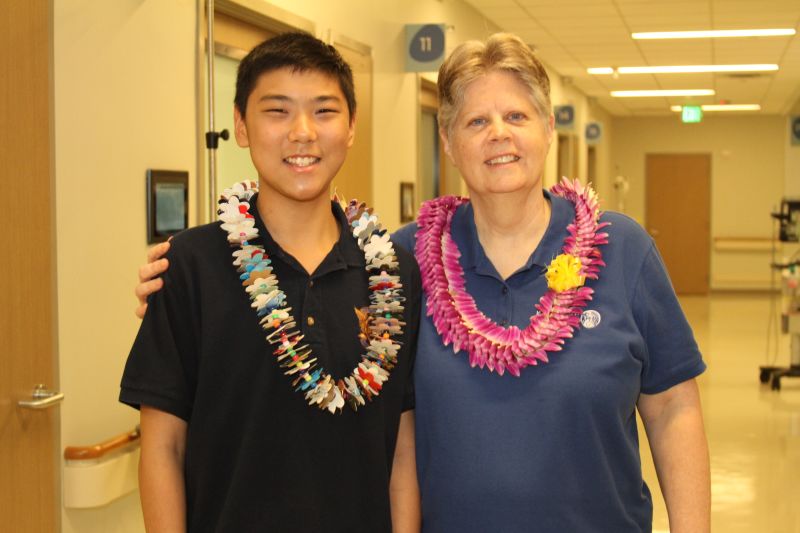 I have known and worked with the members of the transport team from day one and have seen the many amazing miracles they perform.
Debbie Lazur

Debbie Lazur has been a pediatric nurse at Kapiolani Medical Center for Women & Children for 34 years. During that time, she has worked closely with the Critical Care Transport Team, a highly trained crew that takes patients who need additional care to mainland hospitals. Debbie was always aware of the important role these staff members play in keeping Hawaii children safe during the journey. But last year, an emergency for her nephew gave her a very personal view of their lifesaving work.

It happened when Konner Sato was 12. “‘Iolani School has a biathlon and as we were walking back to the pool, the lower school dean noticed that my hands were gray,” Konner recalled. “We walked to the infirmary and found my oxygen level was 72, so they called the ambulance and brought me to Kapiolani.” The Kapiolani staff determined Konner's low levels of oxygen were caused by hepatopulmonary syndrome, when the blood vessels in the heart dilate making it difficult to get enough oxygen to the body. The condition was serious but the cause was much more so. Hepatopulmonary syndrome occurs in people with advanced liver damage. Konner's liver was not functioning. The rest of his organs started to fail.

“Konner was on a high concentration of oxygen and needed to be flown to Seattle and placed on the liver transplant list,” Debbie said. “His body could not tolerate sitting up for an extended time on a commercial flight or he would turn purple, hence we needed the transport team.”

Konner’s family was worried about the trip. They were not sure how his body would handle the altitude, but they had complete confidence in the Kapiolani team. “I have known and worked with the members of the transport team from day one and have seen the many amazing miracles they perform,” Debbie said.

The team delivered Konner safely to Seattle where his cousin, Travis, donated part of his liver. The lifesaving surgery was successful. A year later, Konner is a healthy seventh grader back on track toward fulfilling his childhood dream of being a paramedic. “The experience opened me up to be more grateful,” Konner said. “It shows how important organ donors are because there are probably 100,000 people out there waiting for transplants. There are people who have signed up to be donors but there probably needs to be more.”

Debbie was so inspired by her nephew’s care that she donated $25,000 to the Critical Care Transport Fund. “I wanted this donation to go to the transport team in honor of Konner and all the wonderful things the team does for the folks of Hawaii,” she said. “The Critical Care Transport Team is a very valuable resource to Kapiolani, the families of Hawaii and elsewhere.”

As an island community, the Critical Care Transport program serves patients and families across Hawaii. Donations to the Pediatric Transport Team Fund support statewide critical care transport services via airplane and/or ambulance, 365 days a year. This service provides an essential safety net for Hawaii's most vulnerable patients. For a patient's transport, a registered nurse and a respiratory therapist accompanies a patient on flights between the Hawaiian Islands and to the mainland. Kapiolani's Critical Care Transport team is specially trained to care for tiny babies and sick children, providing the highest level of specialized intensive care during transport. The team can also connect families to additional services based on the child's needs, which may include social workers, chaplains, behavioral health support or lactation consultants.