Wilcox: All in the Family 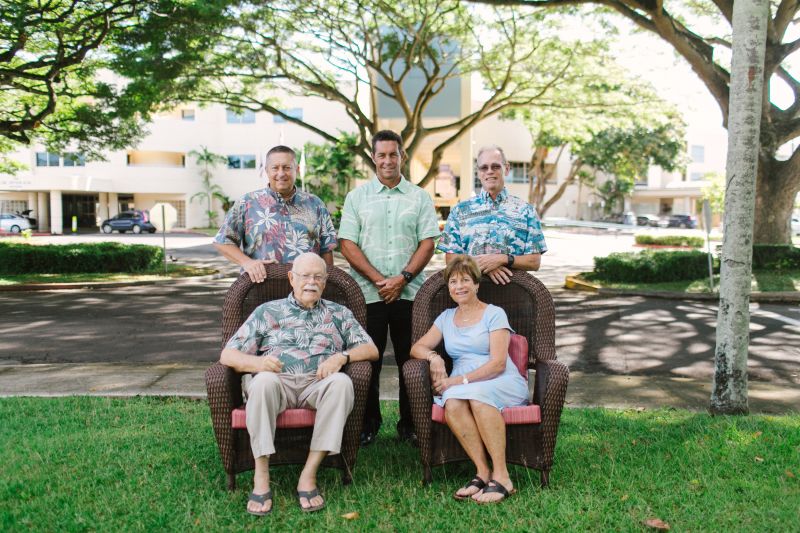 Members of the Wilcox family.

But fortunately, it seems philanthropy, service and a passion for upholding the health of the community run in the Wilcox family. And for this, generations of Kauai families are grateful.
Sam Pratt

Wilcox Medical Center is deeply rooted on Kauai and in the history of the Wilcox family.

"Oftentimes we’ll meet people who ask ‘How long have you been here [on Kauai]?,’ said Sam Pratt, a member of the Wilcox family and president of the Grove Farm Museum. “Then when I begin to tell the story, they find it interesting to meet someone who is actually part of that. It’s fun to talk about.”

The story begins with George Norton Wilcox who was the first Wilcox born in Hawaii in 1839. His parents, Lucy and Abner, were missionary school teachers who settled in Hanalei. “They found a way to stay here and help the community,” Sam said.

Uncle George, as he’s fondly referred to by the family, grew up speaking Hawaiian and English. His commitment to those around him would set an example for generations to come. The successful entrepreneur established a trust fund to help advance public health. Then after his death, George’s family decided to build a hospital in his honor. The 94-bed G.N. Wilcox Memorial Hospital opened in 1938, funded by the family trust’s gift of $200,000. George’s niece, Mabel, was pivotal in establishing the facility. She was a nurse who served with the Red Cross during World War I before returning home with a passion to improve health care for everyone in Hawaii.

Mabel was the great aunt of Dr. Richard Goodale who practiced with the Kauai Medical Clinic for 33 years. The clinic is part of what is known today as Wilcox Health. He knew she was also a pioneer in local medicine, but he didn’t realize how closely he was following in her footsteps. “It happened that the college I went to was the college she graduated from in nursing in 1911,” Dr. Goodale said. “[When I was applying], one of the questions on the Johns Hopkins University application was ‘Has a relative been here?’ and I put ‘no.’ I didn't know. Then after I got accepted and she found out, she was thrilled.” Mabel passed away while Dr. Goodale was in college, but he’d carry on the family legacy at the medical center she helped create.

Dr. Goodale’s sister, Kathy Richardson, also found her place at Wilcox Medical Center. She ran the gift shop from 1986 to 2014. “We made it a gift shop that carried things that nobody else on Kauai did,” Kathy said. “We went out of our way to create a unique shop with everything from clothing to artwork, homemade goods and baby things.” And every purchase added up to support patient care. “Every year between the gift shop and thrift shop, we would give over $100,000 to the hospital to purchase needed equipment.”

The gift shop was another family affair. Edie Wilcox, Mabel's niece, also worked in the shop with her daughter, Deborah Wilcox Pratt. Deborah's son, Bill, remembers growing up playing there. It was such a big part of Deborah's life that her family (David, Sam and Bill) later made a donation to name it after her. “We lost our mother to cancer when I was 17,” Bill said. “I distinctly remember a telephone conversation when she was in the medical center, the night before she died, and she said, ‘This is where I'm from, I don’t want to be anywhere else.’ That’s why it’s extremely personal and important to us to support this type of development of acute care so that people don’t have to leave [the island].”

Kelley Carswell feels the same way. Her mother Gale, a Wilcox descendant, recently passed away. The loss has raised her awareness of health care on Kauai and what it meant to her mom. “She saw the progression over time and was very proud of the improvements in health care here,” said Kelley, who is a registered nurse. Kelley and the Carswell family, the Pratt family, Dr. Goodale and Kathy Richardson are all Wilcox descendants who are contributing to the Wilcox 80th Anniversary campaign to fund emergency care and expand trauma services. “The majority of people come through the emergency room and people are definitely going to need it at some point," Kelley said. "So improving its space or capabilities is just huge.”

For the Wilcox ‘ohana, supporting the hospital comes in many forms, from major gifts to leadership roles. A Wilcox family member has actively served on the hospital or foundation board ever since the hospital opened more than 80 years ago. David Pratt, husband of the late Deborah Wilcox Pratt, was the hospital board chair for 20 years and directly affected Wilcox’s future planning.

“For the merger of the clinic and the hospital, which took about five years to negotiate, we had to bring all the doctors together,” David said. “The big capital campaign for a major expansion was a $20 million project that led to a three-story building that included additional long-term care beds. I also started the conversations to join Kapiolani Medical Center [now Hawaii Pacific Health], which they finalized when I retired. It was a good move.”

“I can’t imagine that those involved from the beginning could have imagined what Wilcox Medical Center is today,” Sam said. “It has come so far in technology and treatment. It’s rewarding to know that our family had an opportunity to play a part in that work.” The work is not over. But fortunately, it seems philanthropy, service and a passion for upholding the health of the community run in the Wilcox family. And for this, generations of Kauai families are grateful.