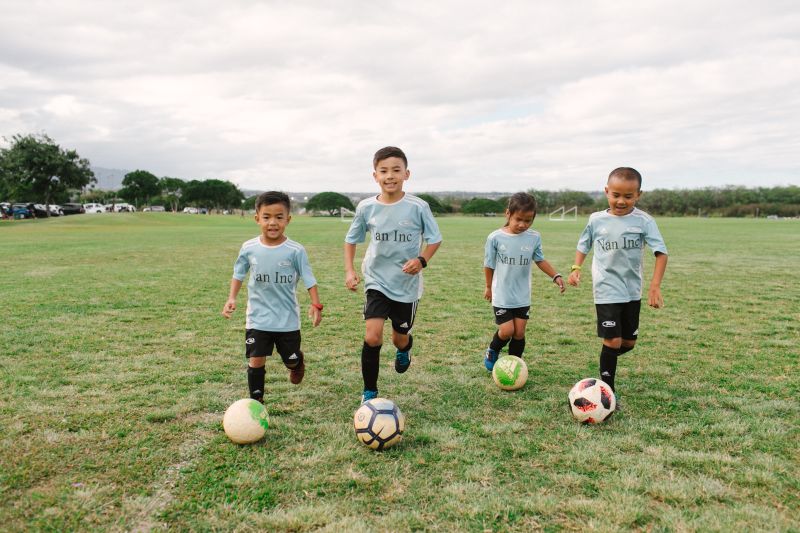 Ethan Kaneshiro (second from left) with his siblings who all play on Hawaii Rush Soccer Club .

It’s somewhere he could go and it didn’t feel like he was just there in a room getting medical treatment.
Joy Kaneshiro

Ethan Kaneshiro lives for soccer. The 10-year-old doesn’t let anything stop him from his favorite game. Even when new soccer shoes left him with blisters, he kept going. But a few days later, he began to feel sick.

“We thought he had the flu because he had a fever, but then he complained about how his heel hurt,” said Joy Kaneshiro, Ethan’s mom.

Ethan had a fever and persisting pain in his heel for a week. A pediatric orthopedist referred him to Kapiolani Medical Center for Women & Children for an MRI. The results revealed something far more serious. Bacteria had gotten through his blisters into his blood, causing a staph infection that invaded his bone. Ethan was immediately admitted for a biopsy. He was in the hospital on antibiotics for 12 days.

“It was my first time staying in the hospital and sleeping in a place away from home where my family was,” Ethan said. “I was a little scared.”

Ethan soon found a way to feel comfortable at Kapiolani. He started going to Brain Station, a school away from school for kids in the hospital that is a part of Educational Services. In classes, he was able to feel normal again.

“What Ethan really enjoyed about Brain Station most was being around the kids and earning points for showing up, doing the assignment or activity,” Joy said. “It’s somewhere he could go and it didn’t feel like he was just there in a room getting medical treatment.”

Brain Station started as a summer school program in 2015, initiated by Dr. Carrie Shiraki-Sakaino who has been a teacher, counselor and student services coordinator for more than 25 years with the Hawaii State Department of Education. Now, it’s a permanent program that doctors can request to help inspire young patients, both mentally and physically. Some lessons come from actual assignments from local schools. Dr. Shiraki-Sakaino, who is certified in cognitive rehabilitation, also creates daily curriculums with specific purposes. For example, on Thursdays, kids engage in math and science. Both subjects are connected to social and emotional well-being. The rest of the week, they may work on other topics that enhance memory, speech or language, or other mental skills. And sometimes, it is the doctors who learn something from the experience.

“It provides a lot of insights to the physicians in terms of how patients are operating,” Dr. Shiraki-Sakaino said. “In medical rounds, a doctor may say ‘seems like the patient’s thought process is a little bit confused and that their right hand is weak.’ And I respond, in Brain Station the patient is absolutely fine, answering questions and writing with no problem.”

Brain Station can be factored into treatment plans, something that can be pivotal for students who are in the hospital for years. Tutors assist kids as young as 5 to college-aged students. The program is also not just for patients; the class time is a valuable break for parents.

“One parent who was at Kapiolani for a long time described it as her ‘respite time’ to go do her workout, which then gave her the energy to continue for the rest of the day,” Dr. Shiraki-Sakaino said.

Learning can also prove to be a treat for the kids. In the Reading Expedition Program, students receive treasure rewards for every 15 minutes of reading. They also enjoy brain bucks, which are colorful chips earned by attending class, completing assignments or engaging in activities. The brain bucks can be used to shop at the school store for toys, books and gift cards.

“If some patients, especially our teens, don't see anything in this store that they want, I ask them ‘What would you like?’ and all of a sudden it shows up in the store,” Dr. Shiraki-Sakaino said. “That's why we really value the donations to the Brain Station, to be able to purchase items for our students that they want because it motivates them to show up.”

It can also be empowering for kids to purchase something for someone in their family or a new friend.

“I gave my chips away because it was my last day and it was someone's birthday, so I gave it to them so they could buy something better,” Ethan said.

Ethan’s team, Hawaii Rush Soccer Club, was so touched by his care at Kapiolani that the club donated $3,000 in his honor to Brain Station. Donations from individuals and organizations like American Savings Bank, Island Insurance Foundation and Pacxa have been instrumental in purchasing school supplies and laptops. Gifts also funded a robot that can remotely connect bedridden patients to class.

Next on the fundraising wish list are a dedicated classroom space and a full-time teacher who can work year-round at Brain Station. The program currently depends on volunteers and part-time tutors, and is held in a classroom near the Kapiolani playroom. Despite its small beginnings, the program has garnered national attention.

“What's really amazing is that I was able to present Brain Station twice for national audiences,” Dr. Shiraki-Sakaino said. “Huge hospitals on the mainland are trying to replicate what we do here.”

Today, Ethan’s back to his normal routine on the soccer field. But his fond memories of Kapiolani and the Brain Station show the experience is a real game changer.

“It's just like having friends at school or being at my house. I can be like myself and not have to be worried about what could happen in the hospital,” Ethan said. “Thank you for making me feel at home.”