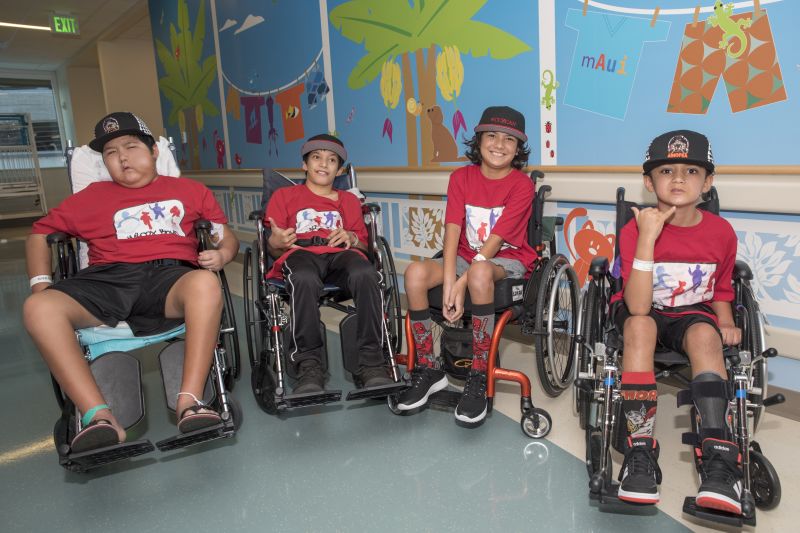 The Wilcox Boys during their time in the hospital together. From left to right: Aidan, Mahoe, Jayven and Bjorn .

I never thought such an amazing experience would come from such a traumatic one.
JoAnne Alvarez-Hopkins

Often there are patients and families whose stories and personalities leave lasting impressions on the staff at Kapiolani Medical Center for Women & Children. Such was the case with four young patients that the nurses named “The Wilcox Boys” because of the inseparable bond the boys formed during their hospital stay in the Wilcox ward.

Mahoe Dancel, Jr., 13; Bjorn Astrom, 8; Aidan Gadingan, 10; and Jayven Alvarez-Hopkins, 10, first met during their physical therapy sessions. Mahoe was admitted with a brain injury; Jayven with Guillain-Barré syndrome, a rare disorder that can lead to full-body paralysis; Bjorn with injuries from a car accident; and Aidan with meningitis. Each boy faced his own set of challenges. But soon, they were inseparable. The four first bonded over video games, Pokémon, sports and other shared interests. Within weeks, the foursome could be found in matching shirts and personalized hats playing hallway tag in their wheelchairs.

Having friends in the hospital made my time more fun,” Aidan said. “Jayven and I both like Pokémon and when he left Kapi‘olani, he gave me his tin of Pokémon cards.”

Their connection really helped the boys. Neighbor island families can feel isolated when they’re living away from home. Since two of the kids’ families live on the Big Island and one on Kauai, they became each other’s support systems. “Out of something so devastating, we were able to form connections,” said Mahoe’s mom, Sharra. “The boys formed friendships, cheered each other on and when they had hard times, they pushed each other a little harder.”

During their more than 90-day hospital stay, the Wilcox Boys spent their time at various Kapiolani services including the Brain Station, rehabilitation activities, Child Life therapy and visits to the Playroom. All of these programs benefit from Children’s Miracle Network (CMN) donations.

“Bjorn and I played Mario Kart in the Playroom a lot,” Jayven said. The mobile game cart that was funded by gifts to the CMN Radiothon is fully loaded with an Xbox, television monitor and a variety of games. The activities are not just for entertainment they– are also therapeutic. According to JoAnne, Jayven’s mom, her son was progressing from complete paralysis, and was able to regain use of his wrist, leg and thumbs to play video games.

The boys would also motivate each other to do their schoolwork in Brain Station. In the beginning, Jayven had limited hand mobility and Mahoe had limited speech. The two decided to work together on assignments — Mahoe turned the pages and Jayven read out loud. The foursome supported each other through every challenge. “When Aidan hit a setback in his treatment, Jayven and Mahoe visited him in the Pediatric Intensive Care Unit,” said Aidan’s mom, Rhonda.

The Wilcox Boys stay in touch to this day. “You can’t break a bond like this,” JoAnne said. “I never thought such an amazing experience would come from such a traumatic one. The staff really exceeded our expectations as families and what we need. They want you to feel like you're home because in a way they become your family.”

Where they are Today

The boys are thriving in their individual recovery journeys.

Aidan is home on Kaua‘i and back to doing the things he loves, such as video games, judo and wrestling. “He’s come a really long way in such a short amount of time,” dad Donovan said. “I was just so surprised how fast it took him to get back into training.” He’s back to regular workouts. “And I can even throw my dad at practice,” Aidan said.

Bjorn has transitioned smoothly to home and school life in Mililani. “In the hospital Bjorn was mostly using his wheelchair, but since he's been home he rarely uses it,” mom Theresa said. His family says Bjorn is walking and running with ease, and is even swimming. Theresa is proud to report, “Bjorn went from not being able to coordinate holding his breath underwater to snorkeling, floating and is now close to mastering his doggy paddle.“

Jayven is still playing video games, but recently achieved a major milestone in his recovery when he started to run again. “Jayven is doing so amazing. He is diving again, swimming and fishing,” JoAnne said. “His next goal for sports is to start playing football. As his mom I’m so scared, but he’s such a little go-getter, it’s hard to hold him back.”

Mahoe is home on the Big Island and getting stronger every day. He is back to bouncing on his trampoline and looks forward to going to the beach or the gym for strength training. Recently, Mahoe visited Kapiolani with the Genoa Keawe Foundation to help teach patients how to play the ‘ukulele. Mahoe’s message to his students was simple. “Just push yourself and try as hard as you can. Always keep going.”