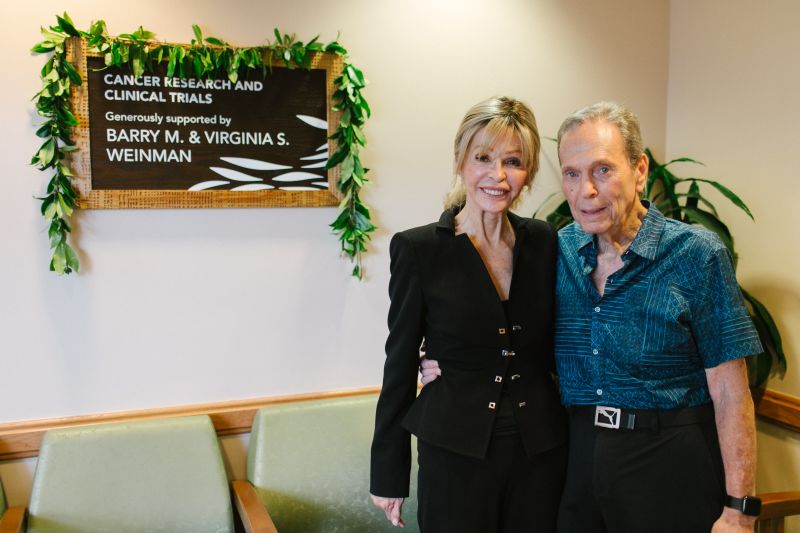 Barry and Virginia Weinman at the Straub Outpatient Treatment Center where the staff will conduct clinical trials funded by their donation.

We want to be at the pulse of that research for an ethnic population that might get missed and an island community that doesn’t want to go far away for care.
Dr. Ian Okazaki, principal investigator for funded clinical trials at Straub

If there was one place that Barry M. and Virginia S. Weinman believe connects them as a couple, it would be Hawai‘i. After all, it is where their love story began in the 1960s. “We met in Hawai‘i when I was at the University of Hawai‘i and he was junior officer in the Navy,” Virginia said. They would marry in the Pearl Harbor Memorial Chapel and celebrate with a lūʻau that included hula dancers. After living in cities around the world, the Weinmans settled in Silicon Valley in thriving fields. Barry was a venture capitalist and Virginia worked in the computer industry.

The Weinmans returned to Hawai‘i annually for 35 years. Yet, when they started to think about retirement, the Islands were not their first thought. “We drew maps of where we could live by deciding that it had to be close to the water and have a decent temperature,” Barry said. “We came up with a crazy city somewhere deep into California.”  They visited that city one day and found themselves traveling down some dirt roads and passing only one general store. “At that point we’d say to each other, ‘Hey, we met in Hawaiʻi. It's such a great place. Why don't we go there?’” he said. So they did. It’s been decades since that turning point, a decision they’ve never regretted.

And Hawaiʻi has benefitted from their move. The Weinmans have celebrated their new home with generous acts of philanthropy. Their most recent gift was a $1 million donation to Straub Medical Center to further develop its cancer care research. It’s the most significant gift to cancer care at Straub and will help expand local clinical trials at the medical center while making it possible for more cancer patients in Hawai‘i to receive experimental treatment.

“Clinical trials in Hawai‘i are very important to the people of Hawai‘i,” Virginia said. “Sufferers of cancer often need to leave the Islands to participate in clinical trials on the Mainland that sometimes will determine the outcome of their cancer. Not only does this inconvenience burden patients financially, but it also takes them away from their family and support groups for weeks, months or longer.”

Approximately 6,700 people are diagnosed with cancer every year in Hawai‘i. The Weinmans’ donation will allow more people from different backgrounds, including often underserved minorities, the opportunity to be included in these studies.

“Hawaiʻi has a unique population,” said Dr. Ian Okazaki, Straub’s Department Chief of Medical Oncology. “The ethnic and racial mix is diverse unlike any other place in the nation. There are so many genetic variations and environmental variations that if we don't open clinical trials up to populations like we have in Hawaiʻi, we'll never learn the best way to approach these individual situations. We want to be at the pulse of that research for an ethnic population that might get missed and an island community that doesn’t want to go far away for care.  We know there is a need for this and we want more local people to have options.”

Ongoing research improves prevention, detection, treatment and quality of life for the cancer community. Part of the goal is to provide multifaceted care, medical team coordination and research in one location at Straub. Dr. Okazaki will be the principal investigator for this cancer treatment expansion. In support of Dr. Okazaki’s research and clinical trials, a portion of the Weinmans’ funding will establish operational resources at Straub including advanced training for the medical staff, pharmacy upgrades and dedicated space in the infusion center for patient testing and monitoring.

The couple have invested in finding a cure for cancer for years. They even host an annual Barry and Virginia Weinman Symposium with the University of Hawai‘i Cancer Center, an international conference where science and medicine experts from around the world share their latest discoveries.

But a few years ago, Virginia learned firsthand about the care Straub provides.  She was diagnosed with stage 3C ovarian cancer, which means cancer cells had spread to both ovaries, fallopian tubes or in organs beyond the pelvis. Dr. Okazaki was her oncologist. “We're very impressed with Straub,” Virginia said. “I love my doctors, my nurses and the whole oncology department. Dr. Okazaki is always looking for the best treatment.”

“It used to be theoretical to us, cancer is something that needs to be addressed and therefore we started funding this symposium,” said Barry. “Then Virginia had ovarian cancer, she had tough times. We both had to live through what she went through. Virginia was fortunate enough that she could get into clinical trials and we'd like to see everybody have that same opportunity.”

The new Weinman funding for cancer research at Straub will also strengthen and grow Hawai‘i Pacific Health’s ongoing partnership with the University of Hawai‘i Cancer Center.

“People are living longer lives from successful cancer treatments that are the results of past clinical trials,” Virginia said. “Doctors determine whether new treatments are safe and effective and work better than current treatments. Clinical trials also help us find new ways to prevent and detect cancer.”

For Barry and Virginia, giving to improve the quality of life for others is a personal commitment that has become a lasting value in their marriage. “Everybody at some point in their life needs healthcare and you should give money to help somebody,” Barry said. “This is our passion.”